I must admit, I’ve been suffering recently with what is jokingly called “Chronic Conference Fatigue Syndrome”.

You know the feeling, but are probably yet to admit it. The last few conferences I have been to have been a little bit underwhelming. More focus on how much drink is drunk afterwards. Politics. “Big Name” speakers sold as the next big thing from organisers who come in, charge a fortune that is passed onto the ticket for the privilege of selling to an auditorium. Itchy Lanyards.

ALWAYS with the itchy landyards.

So it was with a wee bit of trepidation that I attended WordCamp UK. My first WordPress UK Conference.

In short, it was a bit of strategy that I attended (nay, sponsored!) the conference. More and more of my SEO role at 3 Door Digital has been WordPress based, so I felt it was good to mix with the community a little more. So I attended with Alex & my mate John to the sixth ever WordCamp UK, in the leafy town of Lancaster.

The night before began in the leafy surroundings of the Water Witch, with a few other WordPressy types. It was a blast! WordPress’ trials and tribulations were discussed over a pint or two right over the canal. Genuinely couldn’t think of many better ways to spend a Friday night. 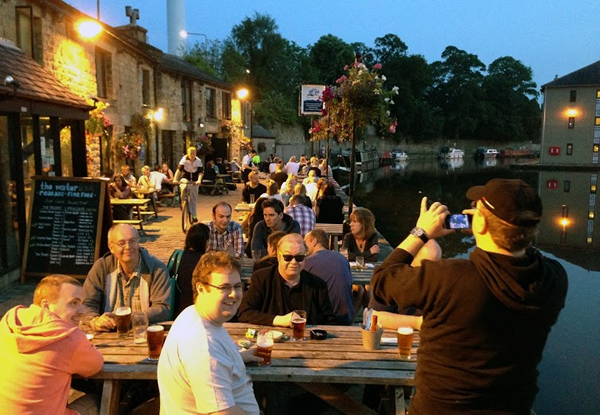 So came to the conference, what of it? Well it was a “hackday” themed affair from my perspective. Not as slick as many other conferences I’ve attended, but full of well meaning and passionate people happy to talk about things. Food was pretty good too.

All in all, many – if not all – of the sessions I attended were enjoyable and had actual bloody takeaways from. Absolutely unheard of from conferences I’ve attended recently. However three talks that I learned the most from were the following:-

Taking Taxonomies Totally To The Top from Simon Wheatley (@simonwheatley), who’s talk gave some great ideas on how to take taxonomies to the next level, particularly when it comes to bookmarks.

WOW! Plugins 2013 from Kimb Jones (@mkjones), as any presentation with at least one plugin that makes me download there and then in the auditorium is worth a share.

The Base Ingredients for Debugging by Jenny Wong (@miss_jwo) was probably my favourite presentation of the day, largely because it was reassurance. I’m largely self taught in WordPress development, so am kind of finding my own way, so for somebody with a little more experience to stand on stage and say that the debugging methods used are similar to the ones I use is rather reassuring :). Furthermore, I’m now a convert into “Rubber Duck Debugging”!

The day ended with a social, and was quite a friendly and nice affair in one of the campus bars on the site. Unfortunately the bloody Race for Life closing off half of Lancaster’s bus routes prevented me from attending the second day, but I saw enough to re-ignite a fire for conferences.

And it was much less than the price of some conference tickets that exude all of the “qualities” discussed in the opening paragraph.

It was my first WordCamp, but won’t be my last. In fact, a troop of us are heading to WordCamp Europe in Amsterdam in a few weeks. If you actually want to learn about WordPress, I implore you to attend.

Big thanks to Primary Image for the images for this post!

4 thoughts on “Confessions of a WordCamp Virgin”