Last weekend I spent the weekend in the Lass o’Gowrie for In Da 80’s, a classic gaming event featuring much alcohol and game playing. As the weekend was wet, I didn’t mind spending it indoors, plus I get to speak to many people I’ve gotten to known in the year or two I’ve spent going to these events. But one thing I’ve yet to do is win a tournament.

You see, when I was the tender age of 10, my favourite item I owned was a Commodore 64. For those who don’t know, the majority of the games came out on cassette tapes, which was played into the machine with a tapedeck. In the summer of that year, my tapedeck’s eject button broke, leaving one game in there – Buggy Boy.

Being my favourite toy, and an alright game stuck in the tapedeck (which I could still play), I played it religiously, getting pretty good. Mum thought she wasted my summer. I proved her wrong this weekend.

You see, one of the games in the 80’s Pentathlon was Buggy Boy. A few pints and large swathes of hogging the system, and this was the result (I use my online handle “retrogarden”). 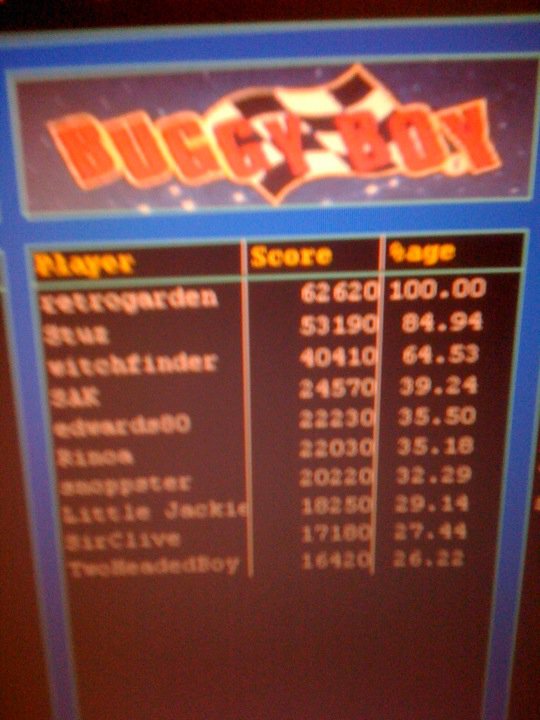 I won a free pint and £20 gift vouchers (in the raffle), and is a rare highlight in what has been a bit of a down month! Damn post holiday blues!

What’s been your best gaming moment?

3 thoughts on “A Summer Not Wasted”